The mitogen-activated protein kinase (MAPK) signaling cascade is commonly hyperactivated by mutations in oncogenes and tumors suppressors such as RAS, BRAF, NF1, and the EGFR family, and ranks among the most deregulated pathways in cancer. MAPK-activating mutations in BRAF and NRAS account for approximately 75% of melanoma cases. Small molecule inhibitors have been developed to specifically target cancers harboring the oncogenic BRAFV600E mutation; however, such treatments rarely results in durable responses due to the emergence of drug resistant cancer. The Karreth lab focuses on identifying and characterizing molecular factors that are critically involved in tumor progression and drug resistance. We believe that therapeutic targeting of such factors may prevent the development of drug resistance when used in combination with the standard of care or be suitable as a second-line strategy to treat resistant tumors.

Melanoma is among the cancers with the highest mutational load, and while current sequencing efforts of human tumors are revealing the genetic and genomic complexity of melanoma, they fail to distinguish driver mutations from passenger mutations. To identify cancer-associated genes with a role in promoting melanoma progression, we performed a forward genetic screen in a BRAFV600E mouse melanoma model that we developed. We employed the Sleeping Beauty transposon system, which allows for simultaneous discovery of tumor suppressors and oncogenes. With this approach we identified over 300 genes, including some with known roles in melanoma development such as PTEN and MITF, that putatively cooperate with BRAFV600E to accelerate melanoma progression (Karreth et al., Cell 2011; Perna et al., PNAS 2015). We have performed an additional Sleeping Beauty screen aimed at identifying genes that can confer resistance to the BRAFV600E inhibitor vemurafenib. This screen yielded over 50 hits, some of which were also found in the Sleeping Beauty progression screen (Perna et al. PNAS 2015). Interestingly, the candidate resistance genes identified in our screen in vivo are different from the resistance genes that had been identified in the various in vitro efforts, and may not play prominent roles in the MAPK or PI3K/AKT pathway.

We are now validating promising candidate genes and are analyzing their functional roles in melanoma progression and resistance using in vitro and in vivo approaches. To aid our in vivo studies, we have generated an ES cell-genetically engineered mouse model (ESC-GEMM) platform that allows for rapid and cost-effective generation of mice. This approach utilizes ES cells that harbor all alleles required to induce melanoma in mice. Moreover, we can efficiently introduce additional components such as inducible shRNAs, CRISPR/Cas9, and/or reporters by recombination-mediated cassette exchange. We analyze melanoma development in mice derived from these modified ES cells by tetraploid complementation, thus eliminating the need for breeding and genotyping. The goals of these studies are a better functional understanding of the driver genes promoting melanoma progression and resistance and the identification of suitable drug targets. In the long term, we hope to be able to design strategies to target druggable melanoma drivers, either directly or via the pathways they regulate, and test their efficacy preclinically in our mouse models and in clinical trials at the Moffitt Cancer Center.

Figure 2: ESC-GEMMs for melanoma research. Expression constructs are introduced into the genome of ES cells carrying 4-5 alleles by recombination-mediated cassette exchange. Mice are generated by tetraploid complementation, and melanocyte-specific Cre is activated by topical administration of 4OH-Tamofixen to induce expression of BRAFV600E and rtTA in these mice. Following the development of hyperpigmentation and moles, the expression of the construct of interest (cDNA, shRNA, CRISPR/Cas9, reporter) is induced with Doxycycline.

MicroRNAs play important roles in fine-tuning expression of protein-coding genes and are involved in the regulation of most, if not all, cellular processes. Deregulation of multiple miRNAs has been demonstrated to promote cancer development. miRNAs may function as tumor suppressors or oncogenes, and their role in cancer is often context-dependent. miRNA deregulation in cancer is commonly achieved through genomic deletion or amplification. In addition, aberrant activity of the miRNA biogenesis machinery affects miRNA levels and has oncogenic consequences. Our lab studies how two additional mechanisms of miRNA deregulation - transcriptional control by oncogenic signaling and sequestration by competitive endogenous RNAs - govern melanomagenesis. We are particularly interested in miRNAs that are aberrantly expressed upon hyperactivation of the MAPK pathway by oncogenic BRAF or RAS. We focus our analyses on melanoma and lung cancer, two cancers that are frequently driven by activating mutations in BRAF and KRAS, respectively. Using in vitro approaches, established mouse models and ESC-GEMMs, we study the following questions: 1.) Which miRNAs are aberrantly expressed immediately after acquisition of the oncogenic mutation, i.e. tumor initiation? 2.) Is deregulation of miRNAs required for the tumorigenic process, or does it constitute a safeguard mechanism that prevents progression to more advanced cancer stages? 3.) How does miRNA expression evolve during tumor progression following the loss of tumor suppressors and during acquisition of drug resistance? In addition, we are also interested in exploring the role of other non-coding RNAs such as lncRNAs and circRNAs downstream of oncogenic MAPK signaling and/or during melanoma progression.

We and others recently demonstrated that RNA transcripts harboring binding sites for the same miRNAs compete with each other for binding to common miRNAs. Termed competitive endogenous RNAs (ceRNAs), such transcript can promote cancer development when abnormally expressed, and we have shown this for the PTEN mRNA and the BRAF pseudogene in mouse models in vivo (Karreth et al., Cell 2011; Karreth et al., Cell 2015). We are currently conducting candidate gene approaches as well as unbiased strategies to identify genes that are recurrently amplified or translocated in melanoma and other cancers and that have the potential to deregulate ceRNA networks. Putative ceRNA candidates will be validated and their mechanism-of-action characterized both in vitro and using ESC-GEMMs in vivo. 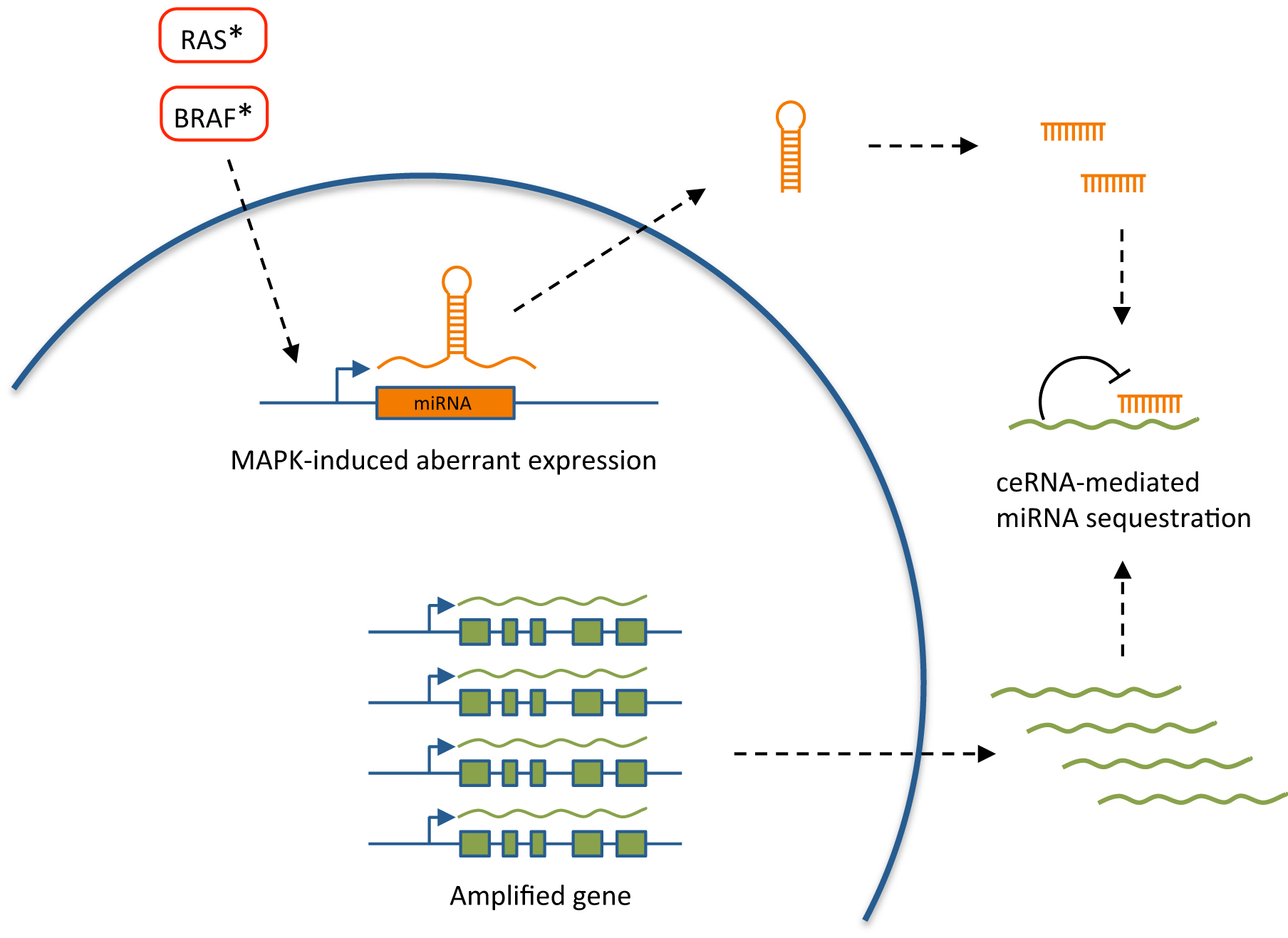 Figure 3: We are exploring two mechanisms of miRNA deregulation in cancer. First, we focus on how hyperactivation of the MAP kinase pathway by oncogenes such as BRAF and RAS leads to transcriptional deregulation of miRNA expression. Deregulated miRNAs may  function either as onco-miRs that cooperate with other MAPK effectors to drive tumor development or as tumor suppressor miRNAs that counteract the effects of increased MAPK signaling thereby preventing tumor progression. Second, we are interested in understanding how abnormal expression of miRNA target transcripts affects the activity of miRNAs. Such transcripts (protein-coding mRNAs, lncRNAs and others) may function as competitive endogenous RNAs and sequester miRNAs. This would affect the ability of the miRNA pool to inhibit expression of other targets that harbor miRNA-binding sites for the sequestered miRNAs.