Origin of the Warburg Effect

Eukaryotic cells have two mechanisms of energy (ATP) production: mitochondrial respiration and glycolytic fermentation. Through the groundbreaking work of Louis Pasteur, it was thought that the less efficient fermentation would ensue only if there was insufficient oxygen to support respiration. This was the predominant thought until about 100 years ago, when the Nobel Prize-winning German Physician, Otto Warburg showed that cancer cells ferment glucose at a high rate, even in the presence of adequate oxygen and sufficient mitochondrial function (1). The reasons that cancer cells choose to use the less efficient fermentative pathway over the more efficient respiration have remained a mystery ever since. We believe that we have solved this mystery, and only need to convince others. We have argued that as the efficiencies are so different, this has nothing to do with energy production, where most have been focusing their time. Instead, we argue, that it must have to do with the production of a by-product of fermentation (2). We believe that this byproduct is lactic acid, and have shown through experiments that: 1) acid production is associated with increased cancer invasion (3, 4), 2) that neutralization of acid can prevent invasion (5-10), and 3) that stimulation of acid production can promote invasion (Russell, in prep). Hence, A) fermentation produces acid, B) acid production improves the fitness and survival of cancer cells that do this, and C) cancers that ferment are more likely to succeed and be predominant in those that we detect (11-14). 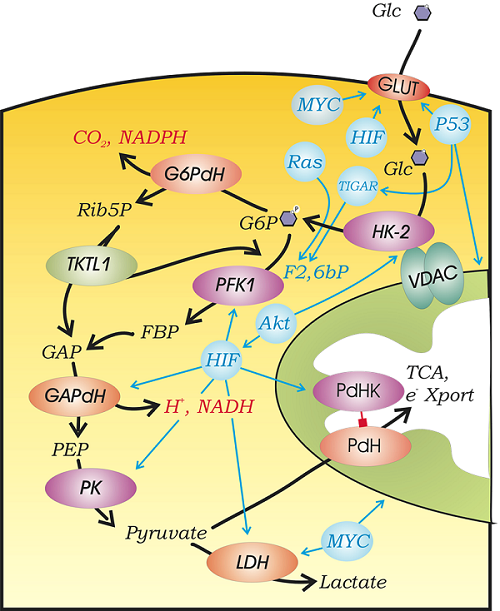 Mechanisms of the Warburg Effect